10 Signs He Doesn’t Want You Sexually

By Team Growth LodgeJanuary 6, 2023Dating Tips for Women RelationshipsLeave a Comment on 10 Signs He Doesn’t Want You Sexually 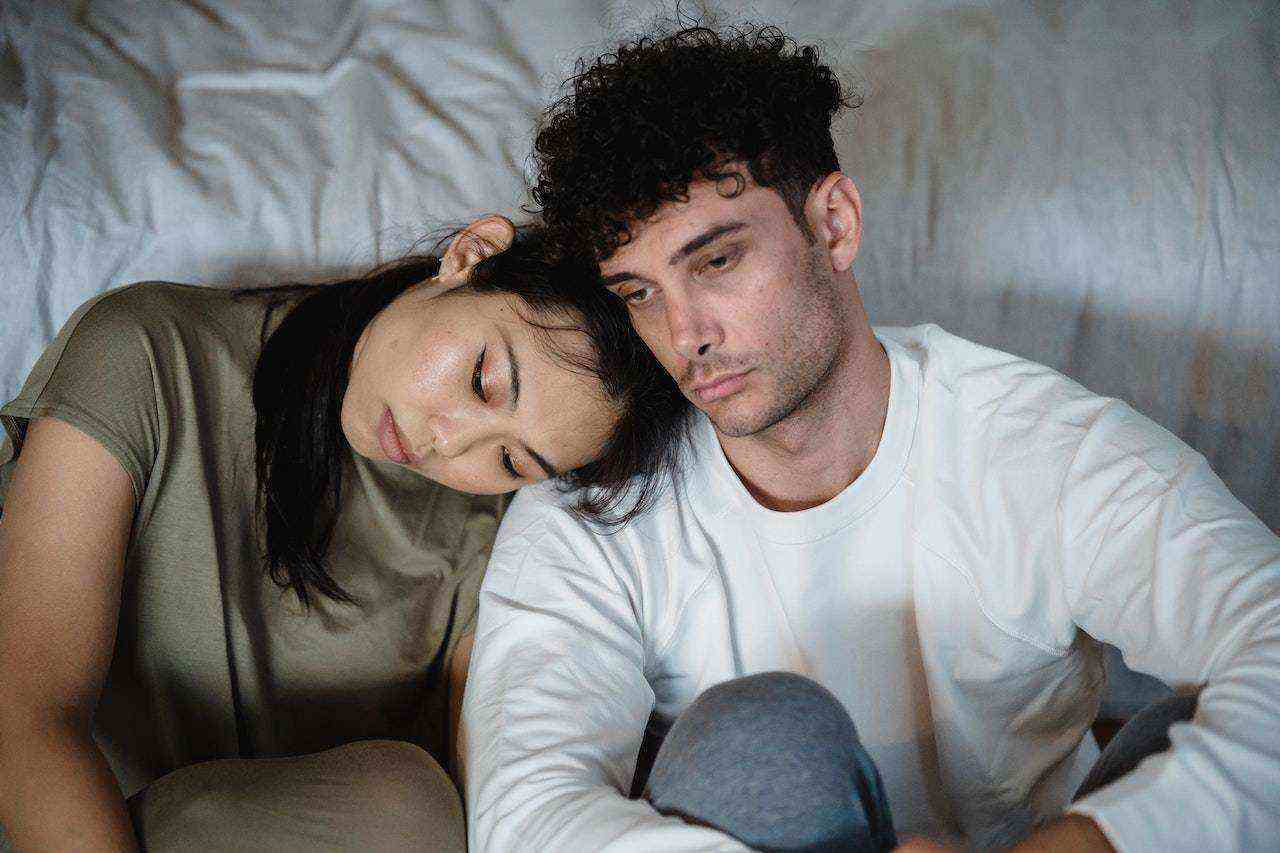 In this article, we’ll be discussing the signs that he doesn’t want you sexually and the practical things to do next.

Are you starting to wonder if your boyfriend has lost interest in being intimate with you?

It’s a question that many people grapple with in their relationships, and it can be a tough one to navigate.

If you’re noticing a lack of physical affection, communication breakdowns when it comes to intimacy, a lack of effort to initiate or be intimate, or a disinterest in your pleasure, it could be a sign that your partner is not interested in being sexual with you.

While it’s never easy to confront this kind of issue, it’s important to address them head-on to maintain a healthy and fulfilling relationship. Keep reading for the signs and some tips on how to approach this sensitive topic with him and get things back on track in the bedroom.

1. He avoids spending time with you privately

The bottom line is, if he’s constantly ruining any chances of you having that private time together, be rest assured he doesn’t want you sexually.

For instance, when you’re together, he’d rather leave the doors open. And whenever you’re going to be alone inside the room, he’d rather just sit by himself outside or in the living room.

He may even deliberately try to prevent the two of you from spending a night in the same apartment.

These are all signs that he’s making sure nothing leads the both of you to sex. And he’s calculating his every move carefully.

Why? A guy who wants to get intimate with you will most likely look for ways to get you privately with him. This can include hanging out till late in the night so that the both of you can have a private cozy time together.

2. He steers your conversation away from sex

A guy who wants you sexually will likely steer your conversations toward sex.

He’ll subtly flirt with you and playfully touch you to see how you’ll react. Sometimes he’ll say dirty things out of the blue to subtly insinuate that he’s down with those types of stuff if you want.

But if a guy isn’t interested in having sex with you, he’ll avoid saying anything that will lead to the topic. Even when you subtly bring up some dirty, flirty, or romantic jokes just to create the mood, he’ll change the topic.

For instance, you might ask him how he feels about a certain part of your body that you find sexy. But instead of playing along and even using the opportunity to touch you, he’ll change the topic or show disinterest.

When you see these types of signs, you should understand what it means.

[Also read: 8 Signs Someone Doesn’t Find You Attractive Enough to Date You]

If you’re sexually interested in a guy who isn’t interested in you, you might still get him to be intimate with you sometimes. But what you’ll notice is how much your time together lacks chemistry.

Why? You can’t force chemistry.

If he isn’t interested in you sexually, it’s going to show in how he makes love to you. You’ll see him distracted. He might even stop halfway. The whole time will be boring and most likely short-lived. And you’ll feel that none of you actually enjoyed yourselves.

A guy who is interested in you sexually will pay attention to how you feel in bed. Your pleasure will be his pleasure. He’ll keep eye contact the whole time and you’ll feel the chemistry in how much attention he pays to you.

4. He’ll find excuses to not have sex

If he isn’t interested, he’ll find ways to avoid it altogether, no matter how well you plan to get him on track.

He’ll use headaches, tiredness, and any other excuse he can get just to get away from you.

Of course, there’s nothing wrong with him bailing out once in a while. After all, we can’t all feel like having sex at the same time all the time.

However, if he has a pattern of always finding excuses, even when it’s obvious that he doesn’t have anything better to do, that’s a red flag.

Besides, if he’s really avoiding sex because he’s busy, then he should initiate the process when he does have the time.

Fine, he complains that he’s busy when you try to take the lead. But when he isn’t busy, he never attempts to initiate.

Instead, he’ll find other things that don’t involve you to keep him busy while simultaneously avoiding being anywhere private and closed doors with you.

If you’re dating and he never attempts to initiate sex with you, it could be a sign he doesn’t want you sexually.

6. He doesn’t find you hot or sexy

No matter how hot you dress he hardly even looks your way for two straight seconds.

When you’re dancing seductively in front of him, he doesn’t even notice. Even if he raises his head and sees you, he’ll simply continue with what he’s doing. These are all signs that nothing about you stimulates him anymore.

He sees you just like any other girl (or guy) that he hangs out with sometimes.

A guy who wants you will quickly understand what you’re trying to do. When you dress sexy, you’ll see the look of admiration in his eyes, like he wants to undress you with his looks.

He’ll compliment you on how you look. He’ll tell you sweet things. This should be natural. It’s how a guy treats you when he finds you attractive.

7. You sense his passive aggression

He’s always ready to pick up fights at the slightest opportunity. And this is because he isn’t interested in having the sweet moments that could lead to something romantic between the two of you.

But the moment you make one tiny mistake, he quickly picks it up.

If you notice this pattern with him, he’s most likely trying to let you know that he’s tired of having you around. He wants you neither physically, emotionally, nor sexually.

8. He hardly notices you

Whether you’re passing through a tough time or you just need his attention badly, he wouldn’t notice. He won’t give you any attention whatsoever. Instead, he’ll always be busy, either with his phone or with friends.

Even when you dress to impress him, he couldn’t care less. He’ll behave like you’re a log that he doesn’t know what to do with. This is a huge red flag.

A guy who likes you will pay attention to you. He’ll notice changes in your mood most of the time. When you attempt to seduce or impress him with your dressing, he’ll notice and respond positively to your advances.

But when he doesn’t desire you sexually, you’ll notice his lack of interest in everything you do. When you enthusiastically try to engage him in a conversation just to change the mood a bit, he’ll shut it down.

These sorts of experiences are painful, and no girl can endure them for a long time. If you notice this happening, better to call him out on what you’re noticing and force him to say what’s going on.

9. He’ll rather pleasure himself

If he was really attracted to you, he would be coming to you whenever he’s in the mood, not turning to a screen or spending all his time in the shower by himself.

Here’s the thing: Sex with someone you love cannot be compared to what’s watched on a screen and done by yourself. There’s so much going on when you’re with someone you like. You’re hugging, kissing, caressing, making eye contact, and saying sweet words to each other.

Any guy who truly finds you sexually attractive will not replace sex with you with self-pleasure.

10. He usually goes to bed before you, deliberately

This is because he isn’t motivated to increase the odds of anything happening between the two of you.

He knows that going to be at the same time with you will increase the chance of the both of you getting intimate, so he’ll rather avoid it.

If you go to bed early, he might decide to stay up late or just wait a little longer so that you don’t end up in bed together, looking at each other.

And if he’s going to bed early, he will not bother to ask you to join him. Instead, he’ll quickly sneak into bed and pretend to have immediately fallen asleep so that you don’t disturb him.

If you’re seeing this pattern repeat itself over and over again, that’s a huge sign that doesn’t want you sexually.

[Interesting: 10 Signs He Doesn’t Love You]

What Do You Do if He Doesn’t Want You Sexually?

The first — and best — step to take, once you notice that your partner doesn’t crave you sexually anymore, is to talk to him about it.

Sure, this is easier said than done. Most people are too afraid to look needy. Confrontational conversations like this can be difficult, and you’re not the only one who feels this way.

But it’s the best way forward.

Tell him about what you’re noticing and ask him what’s going on. Give him instances where he turned you down or gave you a cold shoulder.

After talking things through with him — and he’s on the same page with you — try to figure out what’s going on and do something about it.

It could be that your sex life has become too boring and repetitive and you need to spice things up. Or, maybe there’s an underlying issue between the two of you that you’re not attending to that’s spilling into your sex life.

As the saying goes, foreplay doesn’t start in bed. If you’re having issues with your partner outside the bedroom, it can affect your sex life.

The last option is to take the exit

Maybe after discussing things with him, he didn’t take it well. Or, maybe he even denied everything and then went back to behaving the same way. In this case, it’s clear that he’s no longer interested in being in a relationship with you.

As you work to reignite the spark in your relationship, remember that open and honest communication is key.

Don’t be afraid to have a candid conversation with your partner about your needs and desires, and be willing to listen to their perspective as well. By approaching the topic with vulnerability and compassion, you can create a safe space for both of you to express your feelings and work towards finding solutions.

Whether it’s trying out new things in the bedroom, seeking therapy to address any underlying issues, or simply making an effort to prioritize your intimacy, there are steps you can take to bring the heat back into your relationship.

With patience, understanding, and a little bit of creativity, you can reignite the passion and connection that brought you together in the first place.

But if things still don’t work out after all is said and done, don’t be afraid to move on.