Anita OgeJanuary 4, 2023Dating Tips for Women RelationshipsLeave a Comment on 7 Signs Your Boyfriend Wants to Breakup (Even if He isn’t Saying it) 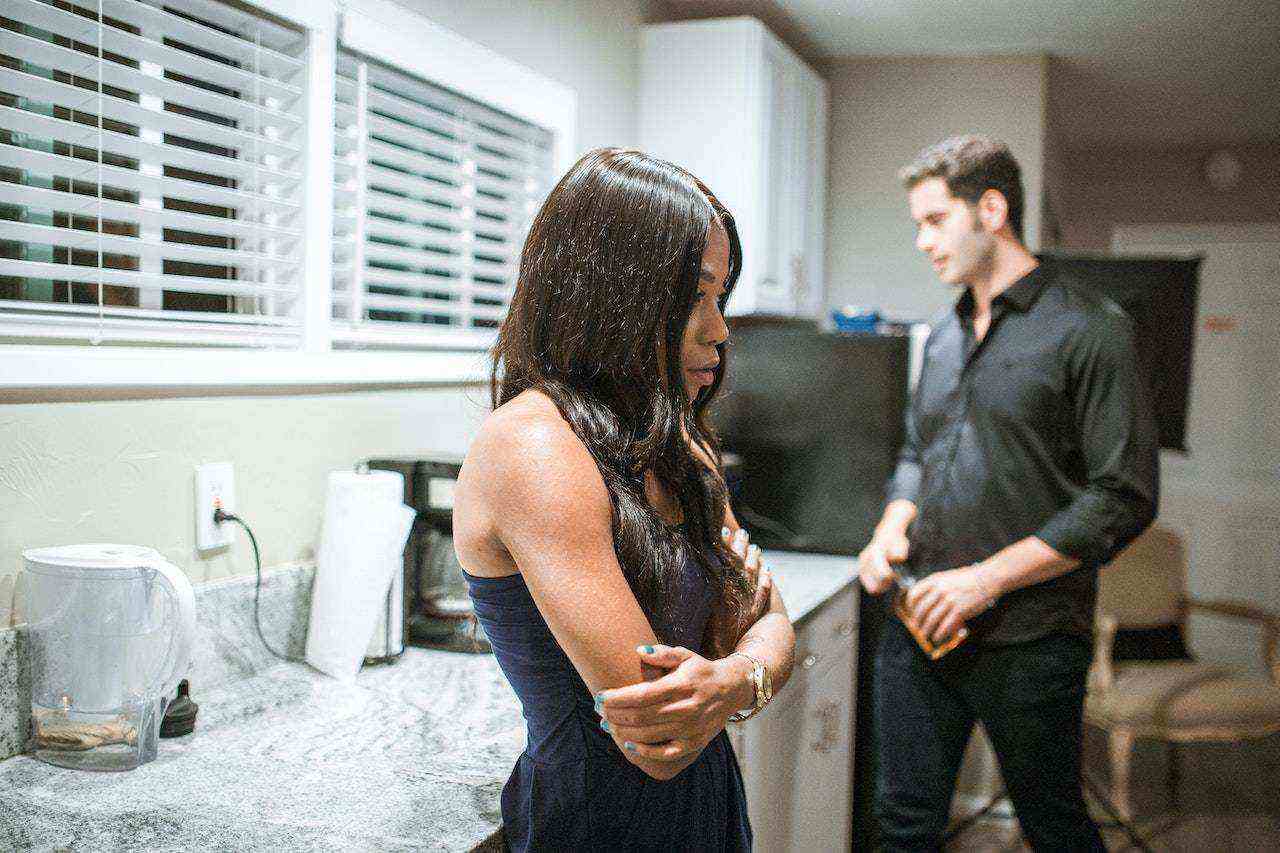 Breakups are never easy. As someone who has been through a few unexpected breakups myself, I understand the fear and uncertainty that can come with feeling like your relationship might be on the rocks.

If you’re worried that your boyfriend or partner may be considering a breakup, even if he hasn’t said it outright, it can be tough to know what to do.

In this article, we’ll explore some common signs your boyfriend may be considering ending your relationship, and what you can do to address any concerns you have about the future of your relationship.

Before we dive into the signs to look out for, it’s important to remember that everyone is different and a guy may have other reasons for exhibiting certain behaviors.

If you are in a relationship and are concerned about the possibility of a breakup, it’s always a good idea to communicate with your partner and try to work through any issues.

However, if you’re noticing multiple red flags or if your gut is telling you something isn’t right, it’s worth considering the possibility that a breakup may be on the horizon.

One of the signs to know that your boyfriend is probably thinking of ending the relationship with you is his loss of interest in you and every other thing you both do together.

I was in a relationship with a boy for about a year and a half. We were both in college at the time and had met through mutual friends. At first, everything was great. We had a lot in common and enjoyed spending time together.

However, as the months went on, I started to notice that he seemed less interested in spending time with me. He would cancel plans at the last minute, or just not make an effort to see me as often as he used to.

I tried talking to him about it, but he always had some excuse or was just noncommittal. And whenever we eventually meet up his mind would always be somewhere else or he would give an excuse of being very tired and retreat to his room.

It’s important to pay attention to changes in a relationship and to communicate openly and honestly with your partner. If one person is no longer interested, it’s better to have an honest conversation about it rather than pretending everything is okay and letting the relationship fizzle out.

One way to know you’re really connecting with someone is the way you communicate with that person. Communication is an important part of any relationship and this part tends to die slowly when the relationship is at rock bottom.

Lack of communication can be a significant indicator that a person wants to end a relationship. When two people are in a committed relationship, they typically make an effort to stay connected and communicate regularly.

This can involve regular conversations, texting, or other forms of communication to stay up-to-date on each other’s lives and maintain a sense of intimacy.

I’m a person who likes to communicate a lot through text, phone calls, video calls, or face-to-face conversations. Having quality conversations for me is fun and very important.

I won’t say I overtly do it to overwhelm my partner or whoever I’m talking with but I just like making good use of the time I spend with people by communicating effectively with them.

When a person starts to withdraw from communication with their partner in the form of not initiating or responding to calls or texts, becoming distant or hard to reach, not wanting to talk about important issues, etc., these signs can be an indicator that he may be overwhelmed with the relationship and wants to move on.

Lack of communication can be a difficult thing to navigate, especially if you are unsure of what is causing the change. It’s advisable to talk openly and honestly with your partner to be sure you’re on the same page.

Read This If You’ve Been Hurt By Someone You Love

Avoiding conflict in a relationship can be a sign that a person wants to break up, as it may indicate that they are no longer invested in the relationship and do not want to put in the effort to address unresolved issues.

When people are happy and satisfied in their relationships, they are generally more likely to want to work through any conflicts that arise.

However, when someone begins to lose interest in the relationship, they may start to avoid conflict as a way to distance themselves from their partner. They start to avoid discussing some issues that are vital and entirely avoid bringing up topics that might lead to arguments or might be emotionally difficult.

Your partner avoiding being in a conflict with you may not always mean that he wants to break up with you. If he’s a person that talks less and seldom gets into arguments with you, it might be his nature to always avoid conflicts.

But if not, It could be that he’s either going through some difficulties in his life and doesn’t want more challenges, especially from his relationship.

When this becomes frequent and is accompanied by other signs aforementioned it could be a message that he’s probably thinking of ending things with you.

When people feel close and connected to their partner, they generally want to maintain that intimacy and may make an effort to keep the relationship strong.

On the other hand, if someone begins to lose interest in their partner, they may start to pull away and become less interested in maintaining intimacy.

One way a lack of intimacy shows in a relationship is through a decrease in physical affection (such as cuddling, holding hands, or kissing).

If your partner is the touchy type he’ll most likely communicate his love to you through physical contact but if he suddenly becomes less touchy or acts uncomfortable whenever you try to have physical contact with him, it’s a sign that something is wrong.

Another way of noticing a reduction or absence of intimacy is when your partner starts spending less time with you and becomes less involved in each other’s lives. This can mean not making plans together, or not seeking out opportunities to spend quality time together.

This sign can be confusing especially if your partner expresses his emotions with less physical contact with you. So it’s important to always communicate with your partner when you start feeling anxious or uncertain.

Interesting: 5 Signs You May Be Forcing A Relationship That Isn’t Right For You

When people are in a healthy and happy relationship, they usually have a positive outlook on the future and are excited to make long-term plans with their partner.

Plans of taking their relationship to the next level, seeing each other’s family, building a family together, and making life better for each other. They work hard together to see their plans come to fruition.

I dated my ex-boyfriend for over a year and, at first, everything seemed perfect.

We were inseparable and spent all of our time together talking about how we would make a perfect family together. We made future plans and talked about all of the things we wanted to do together. We talked about traveling, getting married, starting a family, and setting a legacy.

As time went on, however, things started to change. My ex-boyfriend became distant and stopped making future plans with me.

Whenever I brought up our plans for the future, he would either brush it off or change the subject. It was like he was no longer invested in our relationship and no longer saw a future with me.

I tried to brush it off and convince myself that he was just going through a phase. But as the weeks went on and he continued to pull away, it became clear that he was no longer interested in our relationship.

Eventually, I had to accept that he no longer wanted to be with me and that he had stopped making future plans with me because he wanted to end the relationship. It was a painful and heart-wrenching realization, but it was something that I had to face.

Although it was difficult to move on, I learned a lot from the experience and am now able to look back on it with a bit of perspective and wisdom.

However, if your partner is consistently disinterested in making future plans with you and is no longer invested in the relationship, it shouldn’t be something to overlook.

When someone is committed to a relationship, they make an effort to invest time, energy, and resources into it, and they prioritize the needs and well-being of their partner.

On the other hand, when someone is not committed, they may withdraw from the relationship, neglect their responsibilities, and focus more on their own interests.

When you start sensing signs of selfishness in your partner, or constant withdrawal from putting you first in your relationship, this is a sign of decreased commitment which should not be taken lightly.

One thing I noticed earlier in my past relationship was decreased commitment by my partner. I started noticing it when he started calling less which gradually turned to him not calling at all some days. And then he would not pick up my calls whenever I tried calling.

At first, I thought it was a game he wanted to play temporarily, and decided to play with him.

I would not call him for days and wait to see if he’d call but he wouldn’t and when I called to ask him why he didn’t call me throughout those days he would reply that I didn’t call him either.

Avoiding these signs in your relationship especially if he makes it so clear to you will make you end up hurting yourself. Instead of trying to make things work which will just be you alone doing all the work, it’s better to talk things out with him and if nothing changes, walk away with your dignity intact.

It is important to pay attention to these signs and have an open and honest conversation about them, rather than ignoring them and hoping that the relationship will fix itself.

Who knows he might just come out plainly about his intent for the relationship, whether or not he wants to forge ahead.

But even after trying to have a conversation with him about your feelings and he’s not willing to communicate with you or make any efforts to work things out, it’s better to be happily single than to be in an unhealthy and unfulfilling relationship.

Related: How to Glow Up After a Breakup (12 Things to Do)