13 Sure Signs Your Guy Friend Likes You

Anita OgeJanuary 10, 2023Dating Tips for Women RelationshipsLeave a Comment on 13 Sure Signs Your Guy Friend Likes You 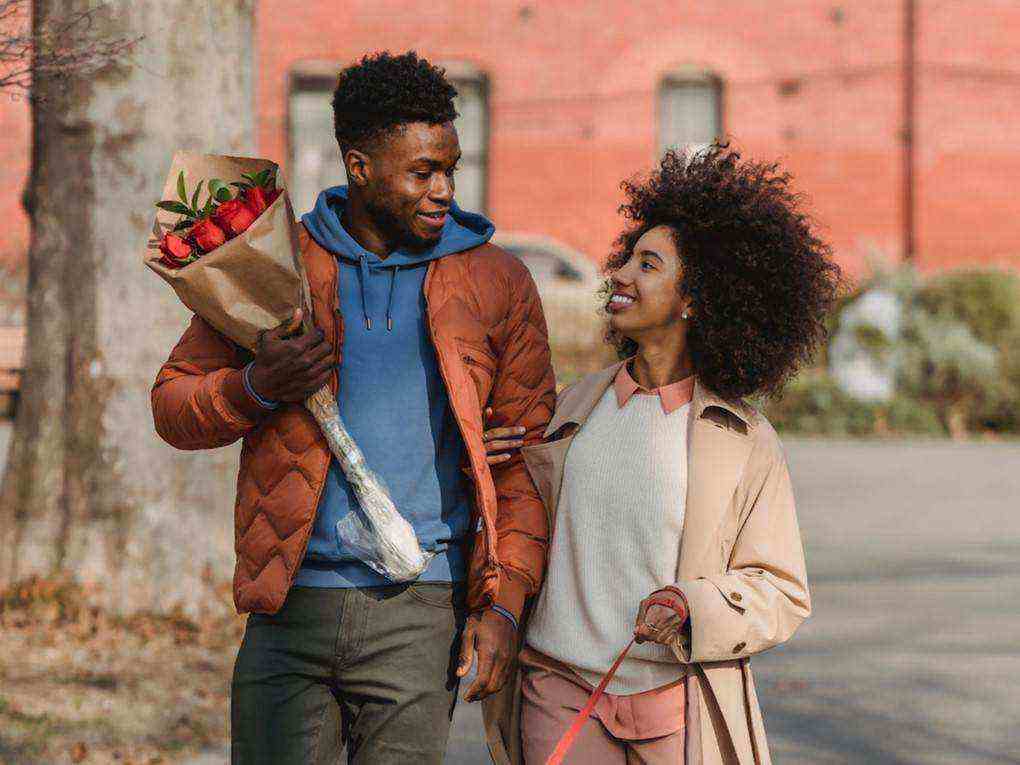 Have you suddenly started having feelings for your guy friend and you’re wondering if perhaps you’re not the only one that’s feeling that way?

You’re hoping that maybe the feelings are mutual?

Or maybe you’ve been friends with a guy for a long time and you’re starting to notice some changes in his behavior that are making you think he has feelings for you.

If he doesn’t outrightly say he likes you and you jump to conclusions in your mind, you might find out later that it’s all in your head and end up hurting yourself.

And if after reading this article you see maybe not all but most of the signs mentioned here, it’s up to you to either wait for him to tell you how he feels about you or talk to him about what you’ve been noticing and that the feeling is mutual.

1. He pays attention and remembers the tiny details

One sign that your guy friend likes you romantically is that he pays attention to you when you talk and remembers your past conversations, maybe not everything but important details from them.

Is this not supposed to be a trait of a true friendship? You may ask.

The truth is we remember what we’ve spent time meditating on, and we’ve all got enough going on with us to meditate on to even think about what someone else told us.

2. He always makes an effort to spend time with you

Another sure sign that your guy friend romantically likes you is that he enjoys spending time with you and he makes an effort to always do that.

This sign is true for both guys and girls. Spending time with someone we are romantically attracted to often leads to the release of dopamine and oxytocin in the brain which is associated with feelings of happiness, bonding, and pleasure.

I remember one time in college, I was attracted to one of my male friends. I would always be enthusiastic about going to class not because I enjoyed the lectures but because I wanted to talk to my crush. In fact, the best time of the day for me was when lectures ended.

I found it fulfilling to always spend time with my crush because we always talked about ourselves, and things we liked, and I always found myself laughing. And at the end of the day, I would go to my dorm feeling so good and motivated to go to class the next day.

Spending time with someone we like allows for more profound levels of intimacy and connection. This can be particularly true if we engage in activities that allow for deeper conversations and self-disclosure.

[Related: 15 Sure Signs He Likes You But Is Hiding It]

3. He always finds an excuse to be physically close to you

Do you notice things like him accidentally touching your hands even in public, or wanting to be by you when you’re out in groups?

Does he find ways to always sit close to you, walk side by side with you, or even try to hold your hand sometimes, or maybe even try to always be on the same team with you?

Physical proximity might be a way for him to show his interest in you. By standing or sitting close to you, or by touching you in a non-threatening manner, he might be communicating that he likes you more than just platonic friends and would want to be closer to you.

4. He always talks about your future together

One powerful way people express their emotions and deepen connections with someone they like is through conversation.

And when a person has a strong feeling for you and wants you to know that he sees a future with you, he does this by asking you about your future plans, your long-term goals, and aspirations, where you would like to spend a vacation, and other activities.

He’s interested in knowing what your future looks like and what you would do to make your dreams come true. He listens to you talk about yourself without interruptions because he knows the topics make you happy and feel special.

5. He tries to impress you

If your guy friend likes you beyond platonic friendship he most likely will try to make himself look impressive to you.

He does things like showing off his physical strength by helping you lift heavy stuff etc, or by grooming himself up.

He might also try to impress you by being chivalrous and demonstrating good character such as holding doors open for you, pulling out a chair whenever you two go out, and even offering to pay for your meal.

He might also put an effort into planning a memorable date or buy a really nice gift for you on your birthday. He could do all these to show that he cares about you and to also be outstanding among other guys.

[Read: 15 Texts That Will Get Him Chasing You]

6. He compliments you regularly

One thing a guy does to a girl he really likes is to compliment her appearance regularly. He may do this subconsciously or intentionally for her to know that he notices her.

Do you notice him giving you compliments on how you look, smell, or smile? Or how he notices even the smallest changes in your appearance like your nail polish or a tiny ring you started wearing and compliments you on that?

These might be cues from him that he likes you and finds you attractive.

7. He gets upset if you cancel plans

Making plans with someone means you both have agreed to set aside a specific time and effort to spend time together. This could be for different reasons like socializing, completing a project, or simply enjoying each other’s company.

When those plans change unexpectedly or get canceled, it can be disappointing and disrupt the other person’s expectations and arrangements.

Anyone would get upset when this happens to them for a couple of reasons. They may have been looking forward to meeting you and getting their expectations dashed due to your unexpected cancellation.

They may feel let down by you because they might have put aside other important things just for the plans you’ve made together.

But what differentiates a person who likes you from a platonic friend is the intensity of their reaction to your cancellation. A person who likes you may be more likely to get upset if plans change because they have a stronger emotional investment in spending time with you.

They may feel disappointed or let down if the plans are changed or canceled, whereas a casual friend may be more understanding and flexible. However, it’s important to know that everyone is different and acts differently in different situations.

Eye contact is a tool that can be used to communicate interest and affection. Although not all guys would manifest this sign if a guy likes you, it shows in the way he looks at you.

For instance, if you’re in the same room but far from each other and you incidentally caught him looking at you, he might hold eye contact with you for longer than usual.

Or if the two of you are talking and he looks directly into your eyes with a piercing gaze as if he’s trying to see through you or into your soul, it could be a sign that he likes you romantically.

9. He checks you out when you’re not looking

This is a common thing that people do when they find someone attractive. It is also something we all subconsciously do when we’re interested in someone, we check them out when they’re not watching.

This could be a way for him to admire you or a way to observe your behavior without being noticed.

It can also suggest that the person is comfortable and relaxed in the other person’s presence. This can be especially true if the person is leaning in slightly, rather than leaning back or maintaining a more rigid posture.

If your guy friend likes you romantically, leaning in while talking to you can be used as a subtle way of flirting with you.

It can be a way of indicating that he is attracted to you and wants to be closer to you. This behavior can be especially noticeable if he is also making eye contact, smiling, and using other positive body language cues while leaning in.

11. He seems nervous or awkward

A lot of people get nervous and act awkward when they’re around someone they have a crush on. This could be because they’re trying so hard to be impressive in the presence of their crush.

His acting nervously or awkwardly around you can be a sign that he really likes you. Nervousness can manifest in different ways like fidgeting, fiddling with objects, sweating, or blushing, and he might exhibit certain behaviors to help calm him down or diffuse the tension such as playing with his phone, twirling a pen, or fiddling with his keys (if he happens to carry a bunch of keys around).

Another way that he might show he’s nervous is by avoiding eye contact. This could be because he is feeling self-conscious or unsure of himself, and he might avoid looking in your direction as a way of coping with these feelings.

On the other hand, if he is making sustained eye contact with you, it could be a sign that he is trying to build a connection and trying to show interest.

12. He appreciates your friendship regularly

Does he often say things like “having you as a friend means a lot to me” or “I’m happy to have you as a friend”? This could be a cue from him that he values your friendship but hopes to have an even more serious relationship with you.

Showing appreciation for a person’s friendship can help demonstrate that you value and respect them as a person and enjoy spending time with them. It is possible that your guy friend may appreciate your friendship as a way of showing he has feelings for you beyond just friendship.

However, it is also possible that he genuinely values your friendship and is just expressing his appreciation for it. But if it becomes consistent, that can be a sign.

If he constantly finds a way of initiating conversations with you daily, it could be a sign that he’s interested in you and wants to be part of your daily life.

He may also make an effort to keep the conversation going by asking about your day or plans, asking more in-depth questions about you, or even sharing personal details about himself with you.

Expressing how you feel about someone can be easy for some guys to do while some other guys just find it a little difficult to outrightly express their emotions.

He could be hiding his feelings for a bunch of reasons, including shyness, fear of uncertainty like losing your friendship if you don’t feel the same way for him, etc.

If you feel your guy friend likes you and you’d want to know but he’s not saying anything, and most of the signs mentioned above have been noticed, I’d advise you to have a genuine conversation with him to be sure about his feelings.

[Read: 10 Reasons Why He Wants You When He Already Has a Girlfriend]