14 Things That Make a Man Want to Kiss a Woman

Anita OgeJanuary 7, 2023Dating Tips for Women RelationshipsLeave a Comment on 14 Things That Make a Man Want to Kiss a Woman 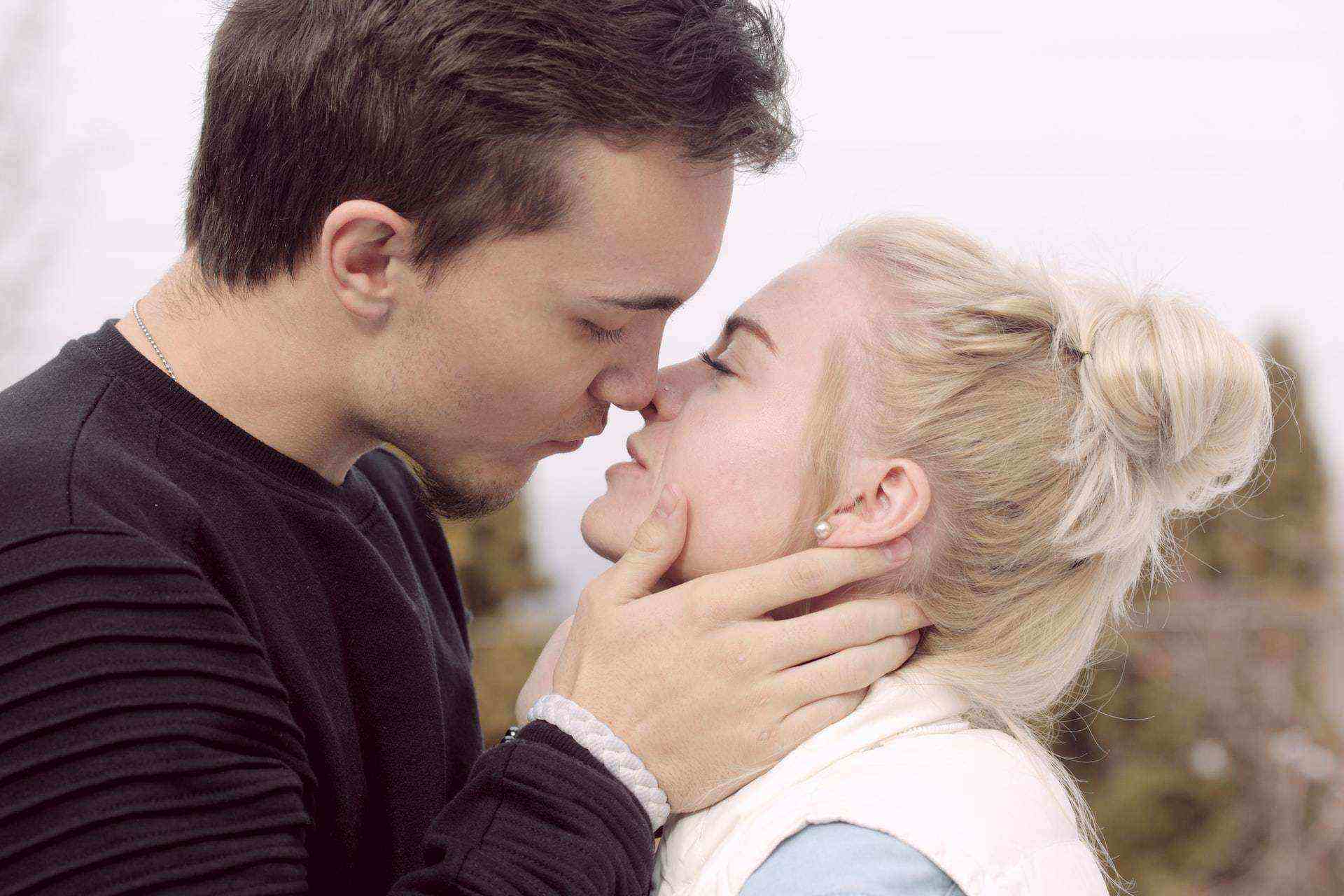 In this article, we’ll be talking about what makes a man want to kiss a woman. And in the end, we’ll give you the practical things you can do to make him kiss you.

Have you ever been out on a date with someone and felt the anticipation building as the moment of the first kiss draws near?

Or maybe you’ve been in a long-term relationship and have found that the desire to lock lips with your partner has dwindled over time. Kissing is such an integral part of our romantic lives, but have you ever stopped to think about what it is that makes a man want to kiss a woman?

Is it purely physical attraction, or is there more to it? In this article, we’ll dive deep into the various factors that can influence a man’s desire to kiss a woman and how they can play a role in a successful, fulfilling relationship.

So whether you’re a man trying to understand your motivations or a woman looking to increase the romance in your relationship, this article is for you.

There are many possible reasons why a man might want to kiss a woman. Some of these reasons may be psychological, while others may be physiological or cultural. Let’s get started!

Emotional connection or bond between a man and a woman is a good reason why a man may have the desire to kiss a woman. If a man feels an emotional connection with you, he may want to express his feelings through physical affection, such as kissing.

This is seen in movies and different occasions such as wedding ceremonies, anniversaries, or any other fun occasion.

When a man kisses a woman he’s emotionally connected with, it creates a sense of closeness and familiarity which can be a boost for a romantic relationship. So he either kisses her to create closeness or to strengthen that which already exists.

A strong physical attraction can be another reason why a man may have the desire to kiss a woman. When a man is physically attracted to a woman, he may be drawn to touch and explore her body, including through a kiss.

And when the attraction is mutual, it could increase the desire and make the situation less embarrassing and enjoyable for both people. Her physical appearance, body language, and scent can influence physical attraction.

[Read: How to Get A Girl (or Guy) to Kiss You Without Asking]

3. The release of oxytocin

The release of this hormone during kissing may contribute to the feeling of bonding and attachment between partners. This may explain why people often feel closer to their partners after kissing. It could be that he desperately wants to have a feeling of this in his brain, or wants the two of you to experience the wonderful feeling together.

Kissing may also be influenced by the release of some chemicals called pheromones. Pheromones are chemical substances that are produced by animals and plants and can affect the behavior or physiology of other individuals of the same species. In humans, pheromones are thought to play a role in sexual attraction and arousal.

There is some evidence to suggest that pheromones may be involved in sexual attraction in humans. One study found that men who were exposed to a synthetic pheromone called androstadienone reported increased arousal and improved mood.

Other studies have found that women who are exposed to men’s sweat, which contains pheromones, report increased arousal and improved mood. However true this may be, more research is needed to really understand the effect and role of pheromones in human behavior.

Curiosity can influence a man’s desire to kiss a woman.

This curiosity can be especially strong if he has never kissed or been intimate with the woman before. The anticipation of experiencing something new and exciting with her can be a powerful motivator for him to want to kiss her.

Curiosity can also play a role in a man’s desire to kiss a woman if he is unsure about her feelings toward him. In this case, the man may feel curious about whether the woman is interested in him romantically and may want to test the waters by kissing her.

If the woman responds positively to the kiss, it may give the man confidence and encourage him to pursue her further.

On the other hand, if the woman does not respond positively or seems uncomfortable with the kiss, it may give the man the information he needs to decide whether or not to pursue a romantic relationship with her.

Intimacy is a fundamental human need that plays a significant role in the way we form and maintain relationships. It can refer to a range of behaviors and emotions, like affection and tenderness.

A man may want to express and experience intimacy with a woman he is attracted to and may do that through kissing.

The specific circumstances and setting can also play a role in whether or not a man wants to kiss a woman. For instance, if a man is alone with a woman in a romantic or intimate setting, the circumstance might feel convenient for both of them and this may trigger his desire to kiss her.

Imagine a scenario of two people who have strong feelings for each other meet at a friend’s birthday party. The event is going smoothly, everyone’s minding their business, all excited and bobbly, and the atmosphere feels just right.

It would be very difficult for these two to not want to take advantage of this opportunity mostly if they know that the feeling they have is mutual.

A kiss can be a powerful way for a man to communicate his feelings to a woman. When done with intention and sensitivity, a kiss can convey a range of emotions including love, affection, desire, and emotional connection.

One way a man can communicate his feelings through a kiss is by the way he initiates it. A gentle, tender touch on the hand or cheek, or a soft brush of the lips against the woman’s forehead, might communicate a sense of love and affection.

On the other hand, a more passionate and intense kiss might communicate a strong desire or attraction. Paying attention to the woman’s body language and verbal cues will help the man gauge how she is feeling and whether or not she is receptive to the kiss.

[Related: 150 Best Morning Paragraphs to Make Him Love You More]

In some cultures, a kiss is seen as a way of celebration and a way to show joy and happiness. For example, in many Western cultures, it is common to see people kissing to celebrate a special occasion or event. A kiss in these situations can be seen as a way to express love and congratulations.

In many cultures, kissing is a way for people to show affection, respect, and solidarity. This may be especially true for men, who may be more likely to initiate kisses as a way to assert dominance or establish social bonds.

There are many ways in which men use kisses to show social bonding with a woman. One common way is through affectionate kisses, which can be given on the cheeks or forehead as a sign of affection and caring.

These types of kisses can be given in a variety of situations, such as when greeting a partner after a long day at work or when saying goodbye.

Flirting is often characterized by playful, lighthearted banter, jokes, and physical gestures such as teasing, touching, or making eye contact. When two strangers flirt with each other, they are usually trying to gauge the other person’s interest to see if there’s a mutual attraction.

If a man and a woman are flirting with each other and there is a strong sexual tension between them, and are also comfortable with the level of flirting that is taking place, it could lead to a kiss.

[Also read: 8 Signs He Is Making Love To You]

Kissing as explained earlier has been shown to stimulate the release of some hormones in the brain, so also does it produce a hormone in the nervous system called endorphin. It may have other benefits as well, such as improving mood, reducing stress, and even boosting the immune system.

A man may kiss a woman to increase the production of endorphins, which are neurotransmitters that are involved in pain relief and contribute to feelings of excitement. So after a hectic day at work, he heads home, but instead of taking a painkiller, he goes straight to his woman to ease his stress.

13. The smell of her perfume

The smell of a woman’s perfume can also inspire a man to want to steal a kiss from her. Certain scents have been shown to have an effect on the brain and can influence a person’s behavior.

If a man associates a particular scent with positive feelings or experiences, it could draw him toward the woman that is wearing the scent and could potentially inspire him to want to kiss her.

Love is often accompanied by a strong feeling of affection and attraction towards the person one is in love with. When a man is in love with a woman, he may feel a strong desire to kiss her as a way of expressing his love and affection to her.

Kissing as a way of showing love and affection is very easy for most men, depending on their temperaments.

While some men may be reserved or introverted and find it hard to express their feelings openly, this doesn’t mean that he doesn’t love you or is not interested in you.

[Read: 16 Psychological Tricks That Will Make Him Miss You]

The above listed are but a few of the many factors that can influence a desire for a man to kiss a woman.

However, a woman has a role to play in influencing such desire in a man. She can present herself in a way that would make her look attractive and make a man desire a kiss from her.

There is no one “type” of woman that all men are attracted to. Men’s preferences can vary widely and are influenced by a variety of factors, including their personal experiences, cultural and social norms, and individual differences in personality and temperament.

Being aware that people’s preferences and attractions are highly individual and can be influenced by a wide range of factors, there are a few things that women can do to increase their attractiveness to men and encourage them to want to kiss them.

This includes confidence, proper grooming, showing kindness and care, having a positive attitude, and a sense of humor, the list is endless.

[Read: 8 Signs He’s Slowly Falling In Love With You]